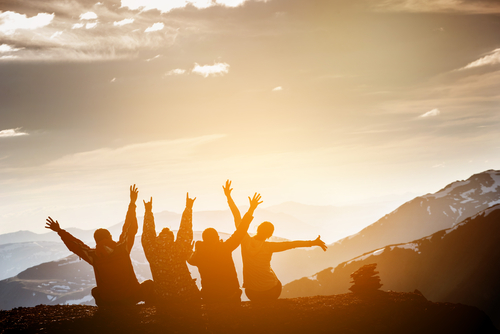 When you think of a rock band, you may automatically think of the stereotypical sex, drugs, and rock ‘n’ roll that generally surrounds their stage presence and may follow them off stage as well.  One alternative rock band that has endured adversity with addiction is Sister Hazel. This band was formed in Gainesville, Florida in 1993 where the name “Sister Hazel” was derived from a local nun that ran a nearby homeless shelter whose name was Sister Hazel Williams. Their intent was make both Sister Hazel’s famous musically and charitable which the band has managed to do over the past 20 plus years.

In 1997, Sister Hazel hit the mainstream with their smash hit, “All for You”. With the success they were experiencing, there was also turmoil behind the scenes. Around the year of 2002, lead singer and guitarist, Ron Block, was abusing drugs and alcohol to the point that the band had to hold an intervention to get a grasp on his addiction to keep the band together and give his family a chance to have a sober father and husband.

Several songs that were produced by the band during that time were songs that expressed the sorrow of addiction. As the years progressed, both Ron Block and Drew Copeland, the band’s backup singer and guitarist, each lost a brother-in-laws to the disease of alcoholism. The pain that Copeland felt after witnessing his brother-in-law literally drink himself to death, gave him the inspiration to put his pain into his music. The outcome is one of their latest songs on their album “Water” that hit in February of 2018. “You Won’t See Me Again” contains emotionally driven lyrics and a moving video that chronicles a young couple being torn apart by the man’s alcoholism.

When Block was interviewed by Billboard.com, he spoke out about his encounter of both sides of addiction and “how much collateral damage there is when someone is in the throes of addiction. A lot of times people react to alcoholism or addiction like they are weak, or it’s just a matter of willpower. But it’s a disease, a chronic, progressive disease. Unless you reach out and get help, it only ends in a couple of ways, and that’s institutions, jail or death.”

Block has now been sober for 15 years and jokes about how “if you get intervened by a rock band, you’ve got some problems.” With their fundraising efforts and their mix of southern rock, jangle pop, folk rock, and classic rock ‘n’ roll sound, Sister Hazel has been able to withstand the trials that addiction has brought their band by making them closer and more musically evolved.

Serenity Oaks Wellness Center is a 5-week extensive treatment program that can help someone who is struggling with drugs and alcohol to get sober. Our holistic therapy and 12-Step aspects combined will show our clients how to adorn their soul in recovery.