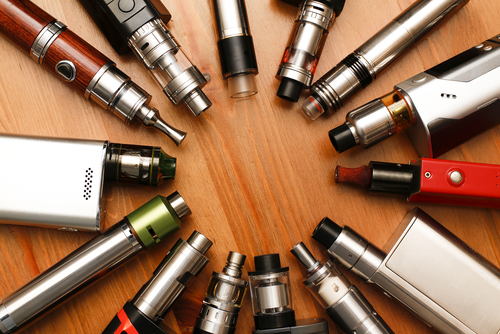 Smoking cigarettes used to be something that the “cool” kids did and in the last 40 years, rates have fallen with smoking teens by nearly 24 percent. The health-risks that have been associated with cigarettes along with higher taxes, have caused a damper on the popularity that cigarettes once had. The littering of cigarettes, and the identifiable unpleasant odor and taste for smokers and for second hand smokers is also part of the decrease in smoking cigarettes. With this decline, E-cigarettes have begun to make their way to campuses around the country because of their much easier use.

The not so “cool” news is that more than 2 million teenagers have been reported to use E-cigarettes which is also known as “vaping”. These battery-powered devices heat a liquid or “juice” will turn into aerosol in the lungs. Since E-cigarettes are fairly new devices, the evaluation is still out on the potential risks and harms that can occur from using them. The E-cigarette juice comes in flavors such as mango, crème brûlée, and mint that causes the misconception that E-cigarettes are not harmful because they taste and smell good.

An E-cigarette can either be vaped through something that looks a pen or an advanced personal vaporizer which is called a MOD. Instead of producing tobacco smoke like cigarettes do, an E-cigarette produces an aerosol through inhalation and exhalation. Although cigarette smoke is full of dangerous toxins, chemicals, and carcinogens, E-cigarettes also have toxins that are released in the fine particles of the aerosol.

The latest craze for young adults ranging from middle school to college is Juuling. A Juul is one of the 250 brands of an E-cigarettes out there except that it is a highly concentrated nicotine vaporizer. One Juul pod equals the same amount of nicotine as one pack of cigarettes in 200 puffs or “wops” from their “wop machine”. The pods are commonly mistaken for a USB stick making it easy to camouflage what it really is while attending class. Students can easily take a wop during class while a teacher is around because Juuling makes it more discreet to pull off.

Although the FDA has banned the sale of E-cigarettes and their accessories to minor, teens have still found ways around purchasing these products. While the jury is still out for the total effects in some of E-cigarettes and how they will result in users, a Juul is definitely a concern in the ease of a high potency of nicotine. Parents should arm themselves with the necessary information to protect their kids from the potential dangers that could come about.

Serenity Oaks Wellness Center is a partial-care treatment program that gives assistance to someone who is struggling with drugs and alcohol. Just because you finished the program does not mean that concludes our help. We offer a Thrive Alumni Mentor Program to our alumni that will help turn your shame and guilt into your greatest asset. Call our 24-hour hotline: 1-305-783-8896