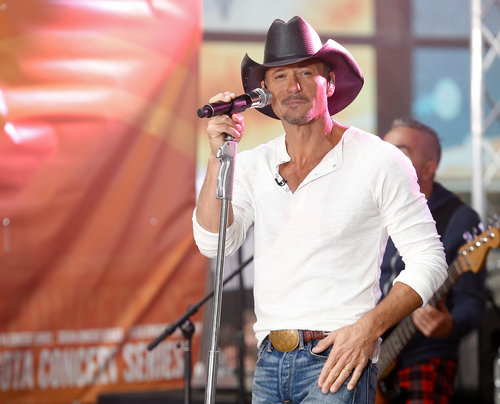 Seeing Tim McGraw live on stage, you would never know that he used to drink alcohol to calm his nerves before his shows and continue drinking to keep from getting the shakes caused by withdrawal. The country singer tried to find liquid courage just about every time he sang in front of a big crowd that made him almost lose the most important audience in his life – his family.

From an early age, Tim McGraw’s own mother knew that he drank too much and worried about his quality of life. The culture growing up in Louisiana back in the 1980’s involved sitting around a bonfire drinking beer with buddies. This type of environment helped McGraw use his drinking as an excuse to fit in with others and allow him to become larger than life in the genre of country music.

McGraw’s breakthrough album called “Not a Moment Too Soon” made him become a mainstream artist starting in 1994. Since his first album, he has produced 14 albums in total. 10 of these albums reached number 1 on the Top Country Charts producing 65 singles. 25 of his singles have also reached a number 1 status. 3 of his songs were the top singles of the year in the Billboard Year-End making him one of the most sought out singers of our time. All the while as he was rising to the top, he was drinking heavily to relieve his anxiety.

McGraw married fellow country singer Faith Hill in 1996, who he had three daughters with. They had a love-at-first-sight passionate relationship that turned rocky with his touring that invoked heavier drinking. During this time, he has been quoted saying “I would get in trouble when I called my wife – she’d find out I was drinking. Then I started slurring my texts and I figured ‘I’ve got to quit drinking.’”

In 2008, Tim McGraw quit drinking cold turkey and has not looked back yet. The first tour that he went on stage without having alcohol as a crutch was a rough one for him. “That was the toughest tour that I’ve ever done in my life to get through that tour not drinking,” he says. “I’d never done it before. I could probably count on one hand the times I’d stepped on stage where I did not have alcohol in me. That was the toughest thing about quitting.”

Tim and Faith still tour together today although their lives are much different these days. He has said that if he had not met Faith, “he’d be dead”. McGraw being sober has made their relationship even stronger and healthier with being better than he used to be.

Serenity Oaks Wellness Center is a 5-week extensive program that helps someone who has struggled with drugs and alcohol to get sober. Our holistic therapy and 12-Step aspects combined will show our clients how to adorn their souls in recovery.